Posted by bardofthewoods on June 27, 2013 in Fiction

“The best woman I ever had, I won in a card game. Not in New Orleans, Vegas or some other “City of Sin”, but in Dayton, Ohio. My prize was an even less likely result given I had not played poker since the sixth grade.”

The best woman I ever had, I won in a card game. Not in New Orleans, Vegas or some other “City of Sin”, but in Dayton, Ohio. My prize was an even less likely result given I had not played poker since the sixth grade.

The year was 1973 and I was on my way back to Indiana University on my Honda 400 motorcycle after a road trip to the Rock and Roll Hall of Fame in Cleveland. A broken chain got my bike and I a ride to a chopper shop in east Dayton. While waiting on a replacement, the shop experienced a boom in business as 12 members from the Sons of Sedition biker gang rode in on their choppers.

While the gang waited on parts of their own, a game of standard poker broke out on the engine block of a Chevy V8 on the shop floor. I was asked to join. Correction–I was told to join. In spite of my best efforts to lose what little cash I had, my hand continued to play hot until everyone folded but a guy they called . . . “The Cannibal”. And I had most of his money. I tried not look at the New Zealand aboriginal tattoos covering his face or his filed eye teeth and attempted to avoid eye contact. I tried to fold myself but a twenty pound hand from behind came to rest on my shoulder and convinced me I would not. Cannibal raised the stakes and put his bitch in the pot. “This is Heather. We call her ‘Header’. She is worth all that cash you got in your purse and then some, kid.”

“But this is all I have”, I said. “Put it in, kid” he said. I discarded and asked the dealer to hit me. I felt the blood run out of my head as my hand went “flush”. I turned the corner up on the Jack of Spades. With the Ace, King, Queen and 10 of Spades I already held, this gave me a Royal Flush. An unbeatable hand. The bike chain arrived and Header climbed onto the back of my Honda and we headed out on I-70 toward Indy into the setting sun. I stopped to let her off at an IHOP on the edge of town but Header, still seated behind me on the Honda, took me by my ears. As she pulled me back against her firm and ample breasts, I could feel her nipples through her tie-dyed tank top which bore the white dove on a guitar neck concert logo and the words, “Woodstock Came to Me”. She put her lips against my right ear and said, “Kid . . . I got no kin within 300 miles–and if you leave me here The Cannibal will track you down and eat you with his chorizo.” This she punctuated with a flick of her studded tongue in my ear canal. I dropped the bike from neutral into first gear and gunned it toward that great red ball.

I awakened to the smell of eggs and bacon and found Header cooking in the kitchen with my mother. We were at my mom’s house in Tipton, Indiana where I had taken us the night before. It was about halfway back to my university. Unbelievably, my uptight Presbyterian mother (history buff that she was) was totally taken with the tattoo of an adulteration of the Monroe Doctrine, signed by The Cannibal, which began at the nape of Header’s neck and extended south beyond the northern border of her bell bottom jeans. It was something of a proclamation to the effect that Cannibal retained a sovereign right to wage war against any party he perceived posed a threat to his interest in the property bearing said proclamation. Specifically–Header.

She was a big hit back at college, especially with my brothers at the SAE house. Header and I didn’t come out of my room the first three days she was there. We locked my roommate out and lived on nothing but Noble Roman’s pepperoni pizza with anchovies which we ordered by phone and had the delivery boy slip through the door. By that third day, the entire hallway reeked of anchovies and sex. (I know –you’re thinking that’s redundant.) On the eve of the fourth day, my “roomie”, in an act of desperation, pulled a fire alarm. We still refused to vacate the room until a fireman threatened to break the door down with a pick axe. Reluctantly, we entered the hallway, Header wearing nothing but her Woodstock tank top.

I got extra credit after presenting her as “show and tell” in my American History class after which she disappeared for a three-day weekend with my history professor. (This may or may not explain how I managed to pull an A out of a solid C- average at semester’s end.)

She became increasingly popular with my fraternity brothers to the point I succeeded in getting a vote passed to make Header an “Honorary Little Sister”. This ultimately had to be reversed when word got out to the sororities and every “official” little sister threatened to terminate her status with our house.

Then–during one night of freshman rush–we floated a keg which Header rolled into the hot tub and, topless, rode like a bucking bull waiving one arm above her head while singing our school fight song.

I awakened the next morning to the guttural “ka-chunk” of a Harley hawg and the low growl of its pipes. I watched from the window of my room as it pulled away from the frat house with Header on the back. Header glanced over her shoulder and gave a small wave. The Cannibal, without looking back or missing a gear, gave me the one finger salute. I turned and saw the words, “Woodstock Came to Me” draped on the headboard of my waterbed. I guess you can’t stand in the way of true love–and the Monroe Doctrine trumps even a Royal Flush.

The rest of my college career was relatively uneventful. I graduated and married a cute little blonde Tri Delt. Her name is Susan. We call her “Suzie”. She shops.

Occasionally, when I am riding my BMW touring bike through the hills of southern Indiana, I am passed by a group of bikers in bandanas and leather. It’s been thirty years since I saw her and I still check the back of each bike for Header. To no avail.

I have a foot locker I purchased from an army surplus store and have dragged with me since my college days. It has a sticker on its lid from the Rock and Roll Hall of Fame. Every once in awhile I unlock the padlock and pull an old tank top from the bottom. I bury my face in it and feel my nostrils flare. I don’t know the chemical formula for pepperoni and pheromones but I know every time I eat pizza with anchovies . . . I get aroused. Susie knows this but doesn’t understand why. She just keeps taking me to Noble Romans every time she is feeling a little amorous. 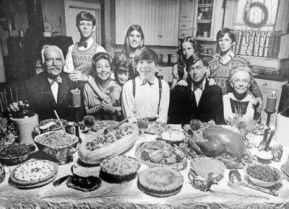 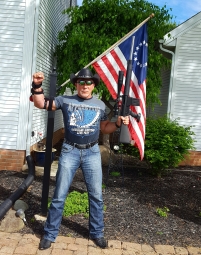 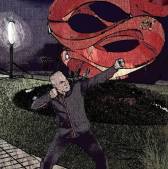